Software Details:
Version: 17.0 updated
Upload Date: 5 May 20
Developer: AKVIS
Distribution Type: Shareware
Price: 49.00 $
Downloads: 61
Size: 167907 Kb
Download
AKVIS Frame Suite is an impressing collection of edge effects for decoration of photos. The software offers a great variety of photo frame versions (from classic to most fancy frame samples) as well as gives an opportunity to generate a frame out of user patterns. A photo frame gives an image the final touch, makes it look complete and of artistic value. Depending on the occasion it can be a strict frame or a colorful motley decoration. Whether you wish to decorate a birthday card or to make a marriage album, you can rely on the program - it will add any photo elegance and style.

1. The new version offers the Passe-Partout frame. The framing with passe-partout opens up a lot of design possibilities and helps catch the viewer's eye and direct it to the motif. Using the new effect, you can give your pictures more depth and make them look less digital.
2. The Halftone effect has been improved and now provides better performance on large-scale images. 3. When applying a frame effect, you now can select the presets directly from the Presets panel. Also, there is a number of built-in AKVIS presets for each frame type. They will speed up your workflow allowing you to try various settings by a single mouse click.
4.The new version provides more customization options by adding the new Gray interface color.
5. Added support for new RAW files for the standalone version.
6. Fixed bugs.

1. Added support for Ultra HD 4K and 5K resolution displays. The interface has been modernized and provides better display capabilities. The texts and new vector based icons now scale correctly.
2. Added the possibility to choose a drive to install the program.
3. Improved the plugin compatibility with image editors (with Photoshop CC 2017).
4. Improved the Print dialog with new features of printing high resolution images on multiple pages.
5. Native 64-bit support on Mac.
6. Added the new Dark interface theme. It's possible to switch between the styles in the program preferences.
7. Support for new RAW files for the standalone version.
8. Facebook and Tumblr are temporarily hidden from the list of the available publishing services due to the changes in their policy.
9. Changed the Navigator window into the roll-up panel.
10. Changed the About the Program window.
11. Changed the Activation window.
12. Fixed minor bugs. 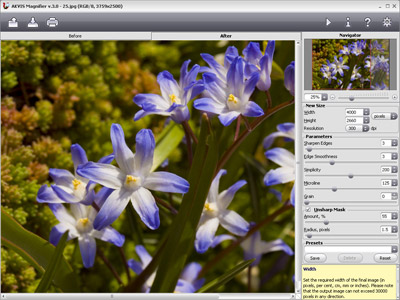